Haven't blogged in a long time. Many things have happened and not commented on. Spring is here and although we felt we were finally having a spring where we were on time, the alligators invaded and we're behind. A beautiful rain this morning and we don't have the corn planted. Last week with 4 Massey tractors, one was running. We're back with 3 running now. Maybe 4 by the weekend, don't need the 4th one, but it is broken in the middle of what will be a corn field with a broken front spindle so we can't even tow it out on the way. 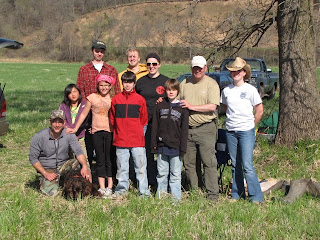 We did have a couple of turkey hunters in the south home, bagged two birds and saw a lot of them. We also had a prof from UW Eau Claire with a bunch of students on a geology outing for the weekend. Should have stories from all of them, so they say. One of the kids caught a 22" Brown Trout in Big Plum Creek on saturday. Big fish, they ate it, didn't save a bite for me.

We planted 200+ trees and shrubs around the upper two ponds over the weekend. We need to do more wildlife corridors with browse and cover. We plowed a spot in the bottoms for a corn and ?? food plot and will expand this along Big Plum in the fall and next spring. We have been getting things done, but the corn is not in, and lots of other things are not done. It just happens that way when you are on the farm; you get bit in the b____ when you least expect it. 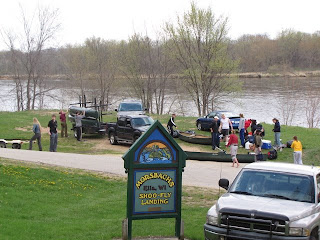 This is an example of how the Shoo-fly Landing is utilized, last Saturday, we were headed to Menomonie and noticed a bunch of canoes coming into the landing. The cars and canoe trailers had been there since Thursday or Friday. We found Shaun and a passel of UW Eau Claire students had started from Eau Claire and paddled to the landing. The next place to pull out is 9 miles further south. Couldn't find a better use for this little piece of America.

As you can see, I had to put my two cents in ... (according to the boss) ... Nobody probably wants to hear about my birds, but guess what, here goes! The first of May was exciting to say the least. My first Oriole was here and 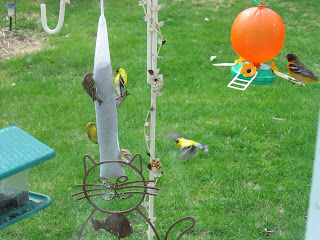 then on the second of May our first humming bird was here. It is good to know that they haven't forgotten where we live and where the feed is so abundant. While I am typing on the blog, the American gold finches are singing up a storm. It is so sweet to hear them. I am typing and looking out the computer room window and the Downy woodpeckers are on the suet packs.

Pete just called and said he was on "N" and would be here soon. His dad was taken to the hospital last night with chest problems. Pete had a doctor's appointment at 9:00 but will be here soon to start another day at the farm.

Today we are supposed to have the bulls tested for their testosterone levels to see if they are potent or impotent, whichever the case may be. Hopefully they will all be in good shape so they can produce babies for next year. We forgot to take any pictures of this happening. Our first bull went right through the end of the chute. He is one massive bull. We had to reload him into the chute and believe me he was not a happy camper. We finally got the testing done and he decided he did not want to go back into the pen so he took a little trip and ended up on the hill in back of the barn, bellering at us. As I said before, not happy at all about the situation. Carl and Pete went back later when things settled down and walked him back down to the chute. I'm surprised he even came down the chute to go back into his pen. When he walked down his head was down and his neck was arched and you could really see that he was upset. Usually the bulls are all very gentle. At this time I would not like to challenge him further. What a day!